Have a Happy Halloween everybody. Have some fun!!

With all of these new courtroom dramas ("Shark" and "Justice" to name two) on television, I thought about this question:

What is justice? And who is deserving of it? How can that fine line between revenge and retribution (similar to discipline and brutality) be measured?

Any thoughts? Any other tv-related conversation starters?

A herf is a social gathering where individuals get together to share in their love of cigars. Is anybody interested in this activity? If so, you can plan and invite people here.

This is just an open-ended question. I am just wondering...

What makes them so inconsistent? What's with all the penalties?

If they didn't shoot themselves in the foot so much, they could be a great team!

What are your Carbon Emissions?

Tired of feeling guilty for using too much energy? Take this quiz to see if you really deserve all that hippie ire pointed in your direction.

My emissions are 21,867 lbs (about half the American average), so all you hippies out there can lay off now.

In the beginning, underwear was used for two reasons: 1) to keep the wearer warm in the winter and 2) to keep “outer garments” form being soiled. But times have changed. Thanks to advances in heating and washing technology, humans now spend most of their lives in climate controlled environs and wash their clothes after only one wearing. So unless you are prone to “accidents”, there is no point to wearing underwear in the modern world.

Over time, tradition will give way to progress. I predict that boxers and panties will go the way of the codpieces and corsets within the next 100 years. Unless, of course, Michael Jordan is still alive. If he keeps selling 'em, I'll keep wearing 'em!

Are the Dems going to put their money on this two-year old horse?

Perhaps, not such a bad choice. But not enough experience? Likely, not...

What makes insurance so expensive?

Besides each state's Department of Insurance and frivolous add-ons, check out this article and it should be quite obvious.

I think they have their direction of causality switched up.

A new Opinion piece by WSJ argues that there is not enough money going to the war effort.

Is there a "right" number to spend on a war?
Is a percentage comparison even appropriate?

Shouldn't a real dollar comparison be used. And alongside that, a timeline trend to compare each conlfict?


BTW-if anybody wants to do that, I would like to see it and I will post it if you do...

13% of American Voters are libertarians

A new study by the Cato Institute concludes that roughly 13 percent of U.S. voters are libertarian or strongly libertarian-leaning in their beliefs.

We didn't start the fire...

If you weren't keeping up with the news, here's some new news on Apex...

North Carolina's Education Lottery has stepped in to solve all of the problems of funding public education in North Carolina. Apparently some people disagree.

Besides, what's 900 million dollars between us friends here in Wake County.

You don't hate children...Do you?

N&O has a little guide on "growth" issues.

Does anybody want to take this on? Is there any way to stop this steamroller?

In a recent CSI episode, one of the main characters (Grisham for those that know) said that life imitates art. Do you think that is true? Why wouldn't is be the other way around? Why wouldn't art imitate life?

I know it is a bit of a 'chicken or the egg' question, but I think it is worth a thought or two. Any takers?

Is treason the right policy? The appropriate use of power? Or the right enemy of the state and society?

The hype on Organic

This week, the North Koreans tested their first Nuke. Is anyone surprised?

Look at their incentives! Is there any reason we should have expected them to abandon their nuclear program?

We can’t do much to punish them for it--we have already imposed sanctions and the Iraq War restricts most avenues of military response (scarce military and attention resources).

And we haven’t offered them anything in exchange for continuing their nuclear weapons program--the Bush administration has refused to even talk directly with the North Koreans let alone put any carrots on the table.

Marijuana on the Ballot in Colorado: 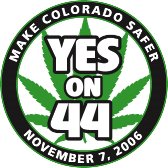 When Eric Clapton did it, it was no bit deal. Why now?


And Bloomberg, still has to be a prick about it...

I watched "All the Kings Men" tonight and it was pretty lack luster, but I thought it embodied libertarian fears of big government egalitarianism. Maybe there really is a shift in hollywood toward making movies with a more libertarian theme.

Does anyone else percieve this trend? If so, what do you think is motivating it?

Mixed Blessings for the Celtic Tiger?

Today I was thinking about a PBS show I watched a few months ago about Ireland's economic turnaround. It was part of the Wide Angle series and it gave a fairly balanced account of the recent changes in Ireland: more trade, more prosperity, but also a changing culture and vicious commercialism. It showed the sale of the Sacred Heart Catholic Church in Limerick (to be replaced by a pub) as the downside of Ireland's newfound capitalism.

This is not capitalism's fault. How could it be? The only reason the church is going to be replaced by a pub is because people are willing to pay much more for a pub than a church in that particular location. Should the Catholic Church be upset? Probably. But be upset with the people who would rather drop money at the pub than at the church, not capitalism. I think this applies more generally to people who oppose capitalism for its rampant commercialism. Let people be free to make and trade what they want, and you'll reveal that human beings are very materialistic creatures. People criticize capitalism when it reveals the less noble parts of human nature.

Brad Pitt: Smarter than he looks

In the October issue of Esquire, the Pitt makes a lot of sense: "I'll agree that drugs are harmful, but we spend $40 billion a year on the drug war and $8 billion a year
incarcerating people, 25 percent of whom are in there for drugs. If someone wants to do drugs, as long as it doesn't affect anyone else in a violent manner, as long as he or she isn't corrupting minors or driving under the influence or endangering others, shouldn't a person have that right? I know the drug war is a can't-miss political issue that no one wants to touch. It's the big pink elephant no one wants to talk about. Think of all the other things we could do with the money." Pitt went on to recommend the book Ain't Nobody's Business If You Do, by the late libertarian writer Peter McWilliams.

Team USA isn't doing so well in a wide variety of sports. Should we care? If so, why?

We seem to handle the Olympics well. What's the difference in these other arenas?

Why doesn't this make sense?

I hoped someone else had made this observation, and of course someone had:

"Some have also made a philosophical argument that even if there is an intergenerational wealth transfer, it is justifiable, because our children and grandchildren will almost certainly be wealthier than us, and (oversimplified) that they "wouldn't mind" lending us some money today, just as we leave money for them in our wills. [I would add that we make them better off through innovation as well.] This doesn't seem to be particularly persuasive to me, but it is one argument that is occasionally made to justify even deficits that fund current consumption."

I'm not saying that deficit spending is justified or that the argument works; I'm only saying that the Democrats are inconsistent on this. It's not that the future generations "wouldn't mind." It's more that Democrats shouldn't care if they do mind, since they like taxing rich people and spending money on the underprivileged (the present??). Also, people of the not-so-near future can't vote yet, which is handy.

When is violent action legitimate?

This could be in protest, or escaping injustice and imprisonment, or even a "just" war.

Is violence ever an appropriate response? What legitimizes it?

A Brief Defense of Capitalism

I was reading The Devil in the White City when I stumled across this gem that I think sums up what I love about the capitalist system.

"[In the late 19th century], a thousand trains a day entered or left Chicago. Many of these trains brought single young women who had never even seen a city but now hoped to make one of the biggest and toughest their home. Jane Adams, the Urban reformer who founded Chicago's Hull House, wrote 'Never before in civilization have such numbers of young girls been suddenly released from the protection of the home and permitted to walk unattended upon the city streets and to work under alien roofs'"

Some folks may think that sounds scary, but I think it sounds inspiring. The outcomes of the market process were not always pleasant, and many women faced injustice and mistreatment, but what other system of social organization guaranteed individuals this kind of of freedom?